St Joseph’s parish was created in 1973 when the area was separated from the parish of St Michael’s. The population of the parish is around 6,000. In Medieval Limerick, there were five parishes in Limerick City; St John’s, St Mary’s, St Michael’s, St Munchin’s and St Patrick’s. In recent times, the boundaries of these parishes have been altered to form the following parishes: 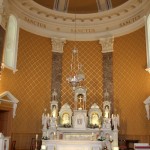 Additional information:
The church for St Laurence’s was near Limerick prison in St John’s parish and was destroyed in 1651. 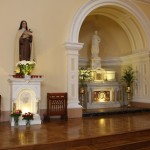 St Joseph’s church was built in 1904. It was originally used as a chapel of ease for St Michael’s parish church. At the turn of the century, it was decided to build a new church to accommodate the growth of St Michael’s parish. The architect of the church was Mr W E Corbett and the builders were John Ryan & Sons. Mr Byrnes gave the site for the church.

The church has acquired the nickname ‘the church of the spite’ because it is situated across the road from the Jesuits’ Church of the Sacred Heart. At the time of the building of St Joseph’s, the then bishop, Bishop O’Dwyer objected to the Jesuits using a two-tier system for worshippers. The wealthy people sat at the front of the church while the ordinary people sat at the back. Despite attempts from Bishop O’Dwyer, the Jesuits refused to change this system and it was decided that a new church was needed which would not have this practice of separation. 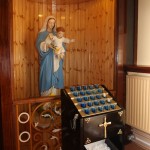 The church is of Italian Neo-classical design and is cruciform in shape. It was built using Limerick limestone. Outside the church on the right, there is a statue of Christ the King, which was erected in 1930. On the pediment of the church, there is a mosaic of St Joseph holding the child Jesus. This mosaic is dated from the early 1960s. Over the main entrance, there is a stained glass window of the Virgin Mary. The church has a number of Romanesque style windows.

On the left of the church, there is a picture of the Mother and Child. There are five stained glass windows in the left transept, which depict (clockwise) the Presentation of Our Lord in the Temple, the visit of the Angel Gabriel to Mary, Lourdes to the memory of Fr Denis Hallinan, the Three Wise Men and the Sacred Heart. 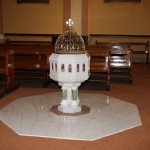 There is a statue of St Peter and one of St Paul to the left and right of the altar. The sanctuary lamp was donated to the church in memory of James and Hanora O’Mara by their children. Egan’s jewellers of Cork carried out the work.

We regret to announce the following deaths

Our Parish in Pictures